December 9, 2014-The 49th Anniversary of the Kecksburg, PA UFO Incident
The Kecksburg UFO Incident: You Can Help Solve it.
By Stan Gordon
(Originally published in the July 25-27, 2014, Old Fashioned & UFO Festival booklet.)
http://www.kecksburgvfd.com

It is hard to believe that we are approaching 49 years since the UFO incident occurred near Kecksburg on December 9, 1965. I was 16 years old when it occurred that day so long ago. I remember quite well as news about a brilliant fireball seen over Canada and several states was breaking on Pittsburgh area radio and TV that evening. More startling was news that the military was also arriving in the Kecksburg area and were going to search for whatever had fallen.
Apparently hundreds of people from around the Pittsburgh area and elsewhere jumped into their vehicles and sought out the wooded location in Mount Pleasant Township to try to obtain a look at a mysterious object that had reportedly fallen into the woods. Among the crowds were also reporters from newspapers, radio, and TV stations from the Pittsburgh region.
The next day the story made the front page of area papers and was also printed in newspapers all across the country. The news also indicated that the search found nothing in the woods and the official explanation was that bright object observed in the sky by multitudes of people was only a meteor, but nothing had fallen to the ground. Word at that time was circulating around the area that some locals that night had observed a military flatbed tractor trailer truck carrying a large tarped object out of the area.
I started making inquiries the next day trying to learn more detail but information was scarce. During the years since the incident occurred, I have had the opportunity to interviews hundreds of people who have information about the case. Among those I talked with were former Kecksburg volunteer firemen who took part in activities dealing with the incident that night. I talked with people who went down into the woods soon after the object fell who came across that mysterious metallic acorn shaped object with odd hieroglyphic-like symbols that was semi-buried down in the wooded ravine.
A former military source told me he was a part of the Air Force security team that guarded the object when it arrived from Pennsylvania during the early morning hours of December 10, 1965, at Lockbourne Air Force base near Columbus, Ohio. It then continued its journey to Wright-Patterson Air Force base. Many of the people that I interviewed about the case were former residents from around Kecksburg and the Mount Pleasant area.
Sadly many of those people are now deceased, and others are getting up in age and not in good health. As we approach the 50th anniversary of this historical local event that has reached international interest, it’s time for those of you who were involved that day in 1965 to share what details you recall with me so it can be recorded for historical reference.
More importantly, I believe from information that has surfaced over the years that some local people still have in their possession black and white photos of the object down in the woods, as well as pictures of military personnel and trucks taken that evening in 1965.
Before it is too late after so many years, won’t you share this information and evidence with your neighbors and community and help solve this mystery? Anyone contacting me can remain anonymous. I am interested in the details of what you recall and any evidence or photos that will give us clues as to the origin of that mysterious object that fell near your local community so many years ago.
I can be reached via e-mail at paufo@comcast.net. Please write to me at P.O. Box 936, Greensburg, Pa. 15601.

December 9, 2014-The 49th Anniversary of the Kecksburg, PA UFO Incident

Living up to its name, the Science Fiction Channel (now called SyFy) premiered a sensationalist „documentary” on October 24, 2003, claiming that a „UFO crash” in Kecksburg was „a second Roswell.” Later the case was on UFO Hunters as well.

In 2014, Discovery Canada, in its utterly sensationalist tabloid-journalism series Close Encounters, re-enacted wild claims about a large acorn-shaped object crashing, that was then seized by government agents and hauled away. See my Blog entry about this, Discovery Canada Serves up the Kecksburg Crash Yarn.

The reality is that a brilliant fireball meteor was widely seen at that time, and studied extensively by scientists. Several scientific papers were published about it in astronomical journals. The supposed „crashing UFO” reported from Kecksburg matches exactly with the great fireball in time, and in direction.
Astronomers Von Del Chamberlain and David J. Krause of the Abrams Planetarium, Michigan State University in East Lansing did an in-depth study of the reports of the Dec. 9th fireball from across a wide area of the U.S. and Canada. They published a scientific paper in the Journal of the Royal Astronomical Society of Canada (Aug. 1967- Vol. 61 no. 4, pp. 184-90). This object was in fact over a hundred miles from Kecksburg, „disappearing at a point over land some 15 miles south-east of Windsor [Ontario]”. (Witnesses typically greatly underestimate the distance to brilliant fireballs such as this. See „UFOs Explained” by Philip J. Klass.) „The usual rash of early reports gave ‘landing sites’ for the object ranging from western Michigan to Pennsylvania… Loud sonic booms were heard in the Detroit-Windsor region.” Using photographs of the object’s trail from two different locations, Chamberlain and Krause were able to calculate the orbit of the meteor before it entered the earth’s atmosphere. You can retrieve the full article on-line here . 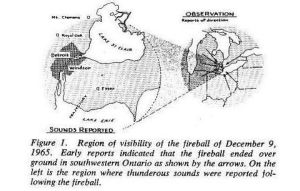 Another article about it, titled „Great Lakes Fireball”, was published in the February, 1966 issue of Sky and Telescope magazine, page 78. See part of the article here. In it, G. W. Wetherill, a professor of geophysics and geology at UCLA who investigated the incident, is quoted: „The fireball was observed by many people in Ontario, Michigan, Ohio, Pennsylvania, and to a lesser extent in neigboring states. In newspaper accounts, a great many supposed impact sites were reported, both in southwestern Pennsylvania and eastern Ohio. Fragments were claimed to have fallen in Ohio and Michigan.
These imagined happenings arose from the impossibility of estimating the distance of an object in the sky. Almost everyone who saw the fireball thought it was much closer than it really was. When it disappeared behind a house or a tree many people thought it had fallen only a few hundred yards beyond.”

Robert Young’s article debunking the Kecksburg claim was published as far back as the Spring, 1991 issue of The Skeptical Inquirer magazine (Vol. 15 no. 3): „Old-Solved Mysteries: The Kecksburg Incident.” ( Purchase back issue for $6.25. ). An updated version of „Old-Solved Mysteries” begins on p. 177 of the book The UFO Invasion, edited by Kendrick Frazier, Barry Karr, and Joe Nickell. (Prometheus Books, Buffalo, NY, 1997).