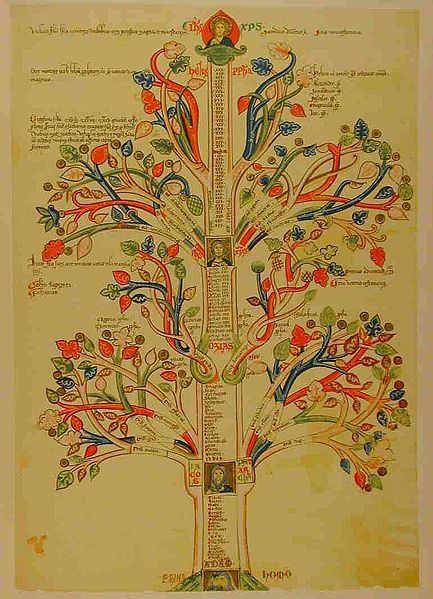 Primele două perioade ar trebui să cuprindă fiecare câte 42 de generații a câte 30 de ani fiecare. A treia perioadă ar fi aşa zisa perioadă a Evangheliei veșnice
Fiore saw in the generations before Jesus an indication of an equal period beginning with the first coming of Jesus. In Matthew 1:17, we read: “Thus there were fourteen generations in all from Abraham to David, fourteen from David to the exile to Babylon, and fourteen from the exile to the Messiah”. Therefore there are three periods of 14 generations, totaling 42 generations from Abraham to Jesus. Joachim understood that another 42 generations would be needed for the second coming of Jesus. He estimated that by assigning 30 years to each generation, one could predict when the second era would end. 42 generations x 30 years = 1260 years. Therefore, the third era, which he called the Age of the Holy Spirit, would begin in the year 1260. This new era was an era of universal love and equality among Christians. Also there would be none of the disciplinary rules of the Christian faith because everyone would live exactly as the Gospel teaches.
Although the new era of peace did not begin in 1260, we can calculate another date using the same idea of De Fiore. Since 30 years is not the correct length of a generation, we will borrow the symbolism used in astrology to determine how many years each past generation may have lived. Remember that the life expectancy of people two thousand years ago, through the Middle Ages to the twentieth century, did not exceed 50. Some authors claim that life expectancy in olden times was, on average, only 35 years because war, hunger and disease took thousands of lives all over the planet. Each person completed a life cycle every 12 months. This means that the Sun travels through the 12 houses of the zodiac to return to the person’s house of birth. So we can consider four phases of a man’s life: childhood, youth, maturity and old age, each stage being 12 years long. From birth to 12 years is the childhood. Between 12 and 24 years, the youth. Between 24 and 36 years, the maturity, and between 36 and 48 years, the old age. Remember that this reasoning is generalized in order to make the necessary mathematical calculations. Certainly, many people in the past lived for more than 50 years. However, many people also died at twenty-something years old. The age of 48 is a symbolic medium for the time to which we refer. So we have 4 stages for the human life, and each phase is equal to 12 years, totaling 48 years of life. Now, if there were 42 generations before Christ, analogously, we will also have 42 generations after Christ, before the arrival of the third age. So, the beginning of the Age of the Holy Spirit predicted by Joachim of Fiore will be: 42 generations x 48 years = 2016. Thus, making the appropriate correction to the calculations of the prophetic Italian abbot, we conclude that the Age of the Holy Spirit and the consequent second coming of Jesus, a new world, will occur in 2016. The thinking of Abbot Joachim of Fiore is as correct as the division into three ages, but he missed slightly in terms of the time estimated for each generation.